Update: For (yet another) yarn store in Zurich, see my more recent post here.

I'm in the beginning stretch of my Camp Nanowrimo marathon, but so far still on target towards my goal, so I'm feeling encouraged. Although I have started skipping around in the story, writing random scenes that may or may not actually occur later. But that's why I actually enjoy Nanowrimo - focusing on the word count forces you to just write and not get too bogged down in details (like, say, plot).

I've been crocheting steadily (B claims maniacally) over the past month in an attempt to reduce the size my yarn stash - a noble goal, but unfortunately the more I work, the more I feel the need to purchase yarn, a vicious circle. Particularly when dreaming of tackling a goal the size of an afghan, for which you often need 700 yards or more of a single color.

So, I did some poking about online, and I found several yarn stores in Zurich that I decided to check out - for investigational purposes only, of course.

I had previously purchased a few skeins of yarn here in Switzerland, but most of my collection was brought over from the US - it's not heavy and it makes great padding for packing any delicate items, such as an Xbox. Before starting my investigation, the only known yarn locations I had were Manor and Coop City, both large department stores with decent-size craft sections.

Opening hours/addresses for all stores are listed at the bottom of the post.

Manor:
Manor is the Swiss equivalent to department stores such as JC Penney or Macy's and has a sewing/craft section on the fourth floor (the Zurich store is located on Bahnhofstrasse). The selection is varied and I would compare it to the selection at Michael's (although the yarn is overall better quality), in that they have many basics and a few novelty/fun ones. If you just want something to scratch the knitting/crocheting itch, it is easy enough to pick up a few skeins here. Prices are clearly marked and run from CHF 1.50/skein - CHF 13/skein for the nicer yarns. This is the only place I found with the heavy cotton jersey "yarn" that I used to make the above pink/maroon basket. They do occasionally have yarns on sale (sales are rare here, stores don't have an almost-constant "sale/clearance" sections as in the US), so I try to drop by regularly. As a side note - I am allergic to wool, which often restricts my yarn possibilities, and this restriction felt most limiting here, although there are many cotton blend options. (Also note: in German wolle is simply 'yarn,' despite what google translate says. 'Baumwolle' is cotton, while Schurwolle is traditional sheep's wool, I believe. However, most yarn labels here do have details in English, so don't fret about knowing your textiles in German.) 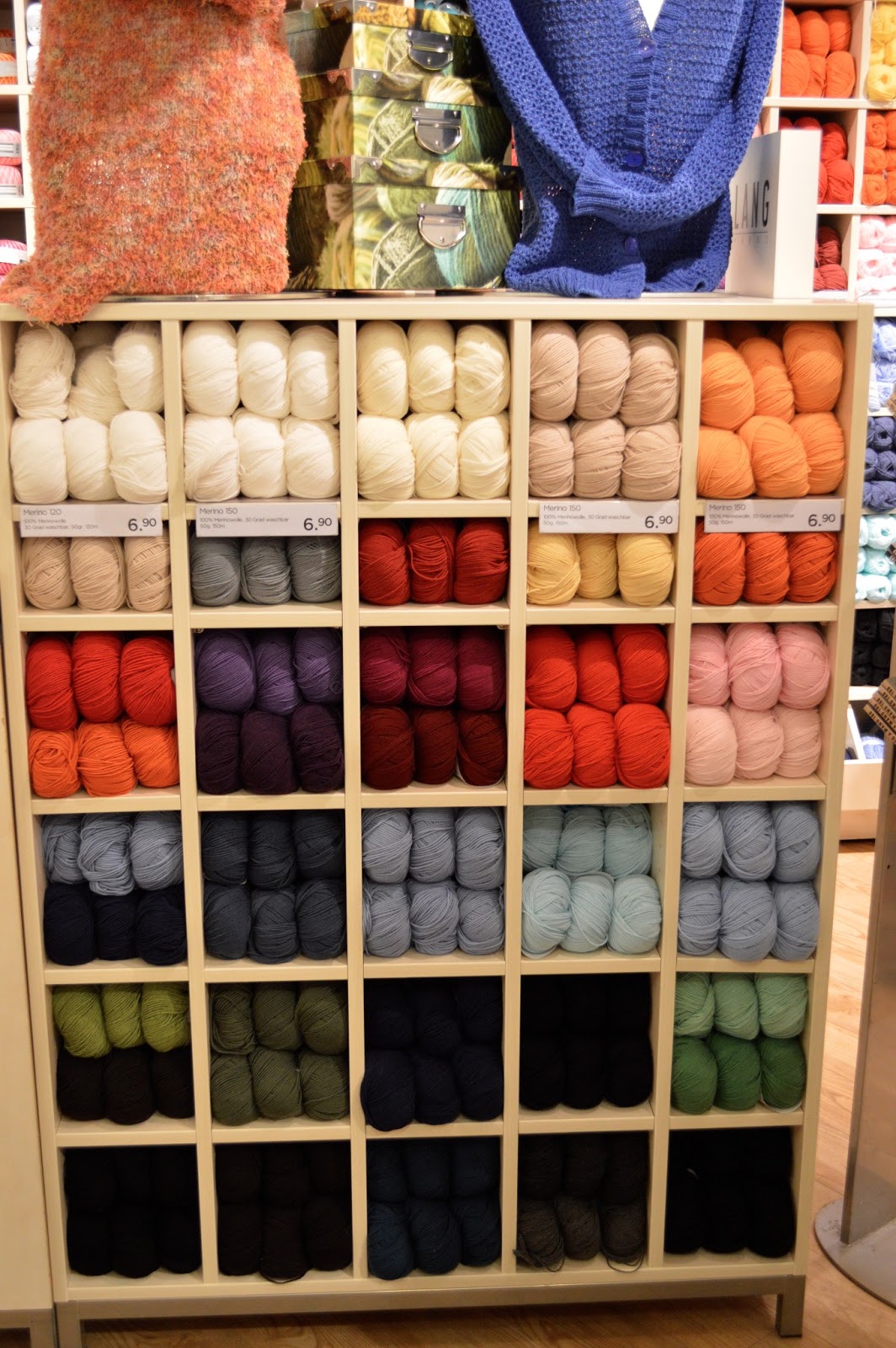 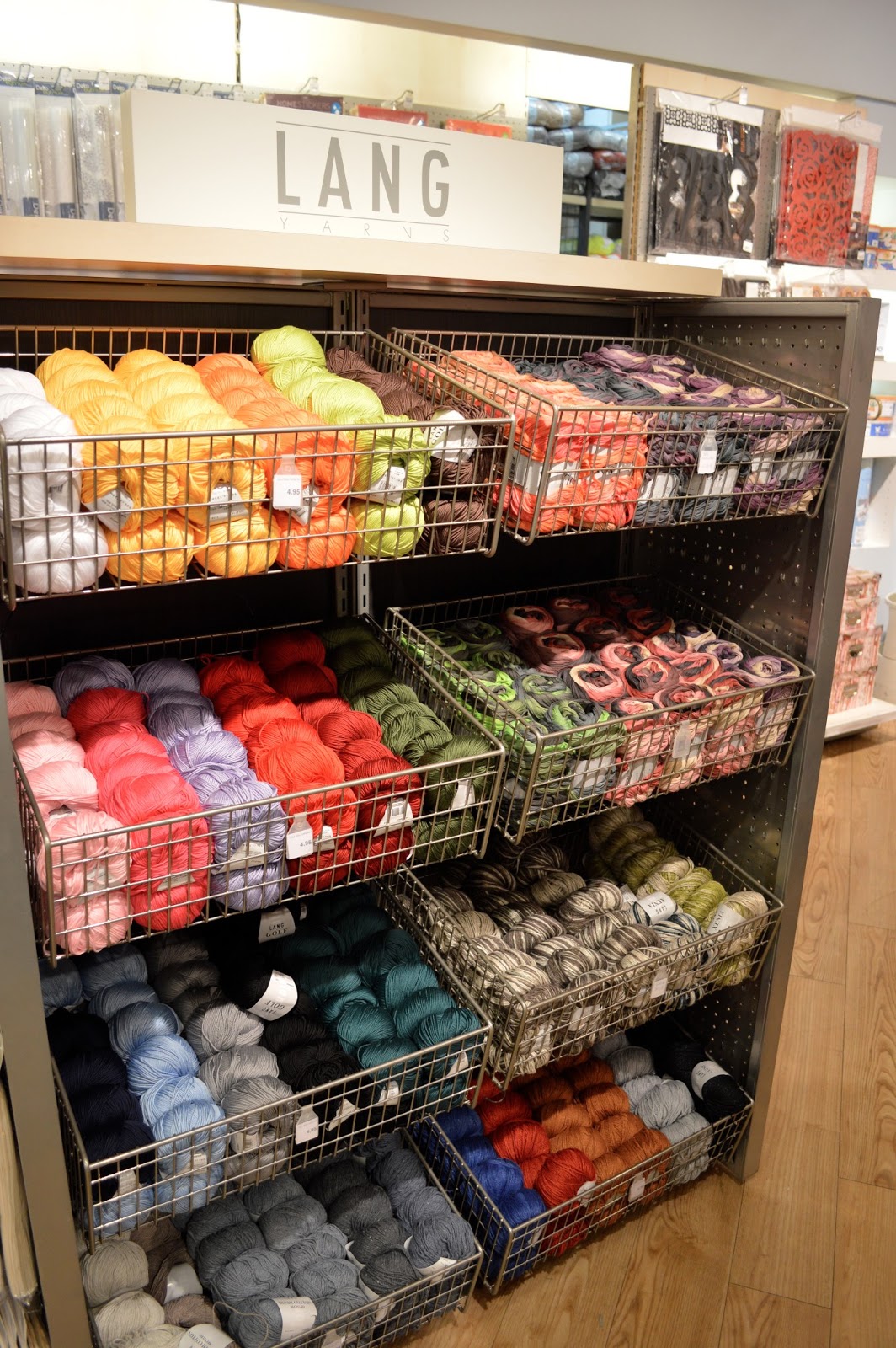 Coop City is one of the multitude of store types under the Coop banner (we do most of our grocery shopping at the local Coop), and also has a sewing/yarn section. I've been to a few around the city, and by far the best selection is at the large Coop City at St. Annahof (also on Bahnhofstrasse, pictures below are from this location). They carry a lot of the same brands and options as Manor, and prices seem comparable. I did feel that this location had more non-wool options, as well as perhaps a few more novelty yarns (in terms of multi-color, not necessarily texture). Prices are also marked here and run from CHF 3.70 up to 13/skein. I did not find any sale yarn, although that doesn't necessarily mean that they never have any.

Another place that carries basic, 'cheap' (by Swiss standards) yarn is Migros Do-it + Garden, but the one I went to had a very poor selection, almost entirely involving some percentage of wool. So I mention it here to be fair, but I wouldn't recommend it.

After the somewhat familiar chain stores, I switched gears. I found three yarn stores in searching online (well, I thought I found four, but one of them was a general craft mecca) and went to check them out.

This store is near Stauffacher and rather small, but manages to pack quite a bit into the space. About 2/3 of the store is devoted to yarn, while the remainder has a fairly wide bead selection, although I didn't take the time to explore that part thoroughly. When I first walked in, my main impression was simply the explosion of color. They had a lovely selection and I could've lurked for hours, but I managed to pull myself out after 20 minutes of fondling the various selections. They definitely had a much wider variety of yarn textures and materials/blends than the non-specialty stores - alpaca, bamboo, linen, merino, acrylic, mohair, silk - although it didn't have quite the range of the other two independent stores (below). They have a basket of clearance yarn to the left of the entrance with skeins for CHF 3- or 5- each. My only critique, as a budget-conscious wallflower non-German lurker, is that there were no prices anywhere for their regular yarn stock. It would have been nice to have some idea whether I could possibly afford the yarn I was fondling. 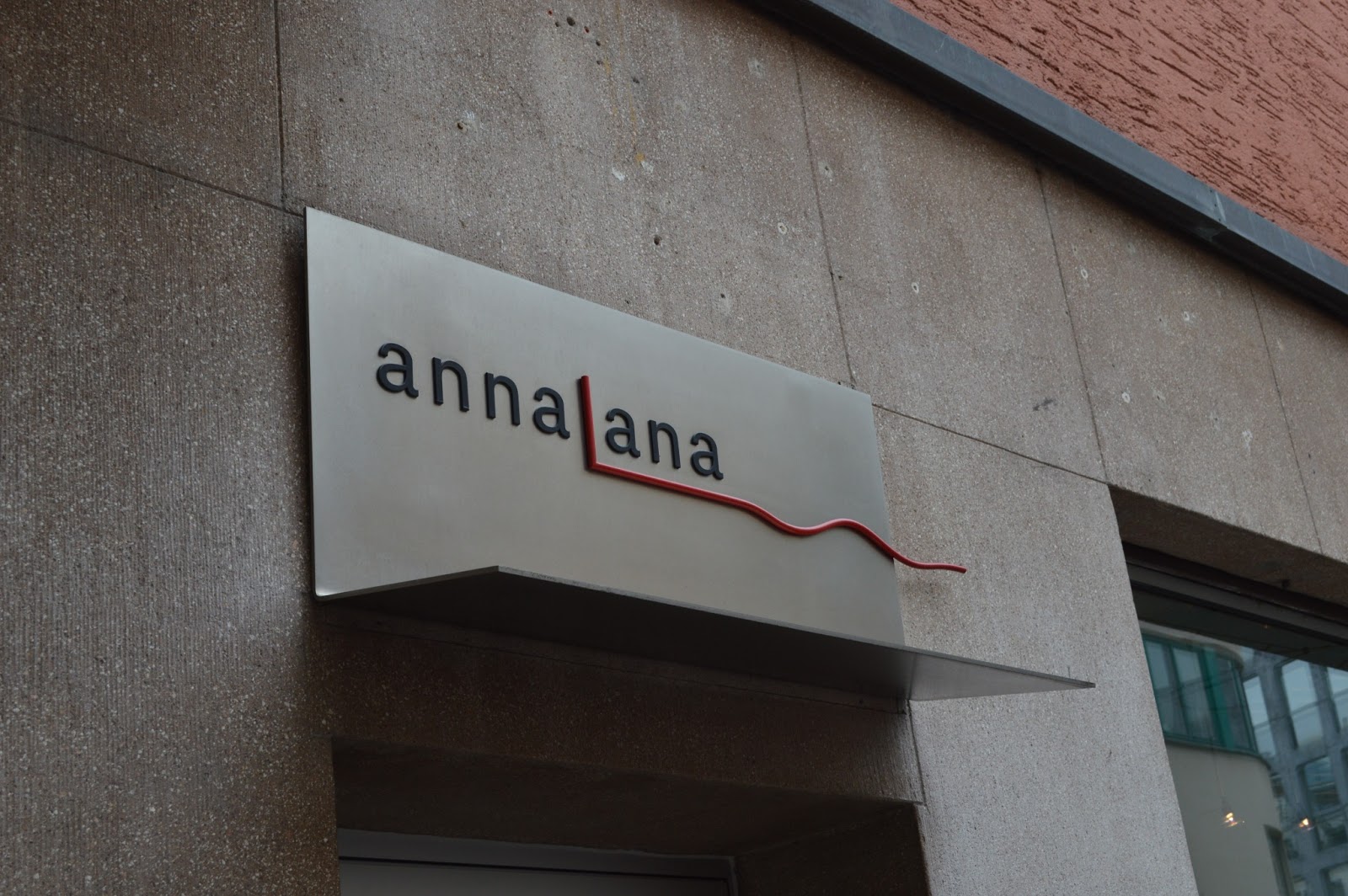 The next two yarn shops took me to the east side of the city, on the side of Zurich lake that I don't get to very often. My first stop was Vilfil, easily the largest yarn shop in the entire city. The place was simply enormous - they have two rooms towering with shelves and shelves of yarn. They only display one skein of each color/type of yarn, because apparently they have a basement where the actual stock is kept. The organization seemed rather random, but it must have made sense to the people that work there, because upon inquiring about wool-free yarn (the lady was more than gracious at slipping into English), she knew right where to go. I managed not to buy skeins and skeins for an afghan that I really want to attempt, but I did break down when I found their basket of clearance yarn, and I bought 4 skeins of white/silver/black for CHF 3.- each. 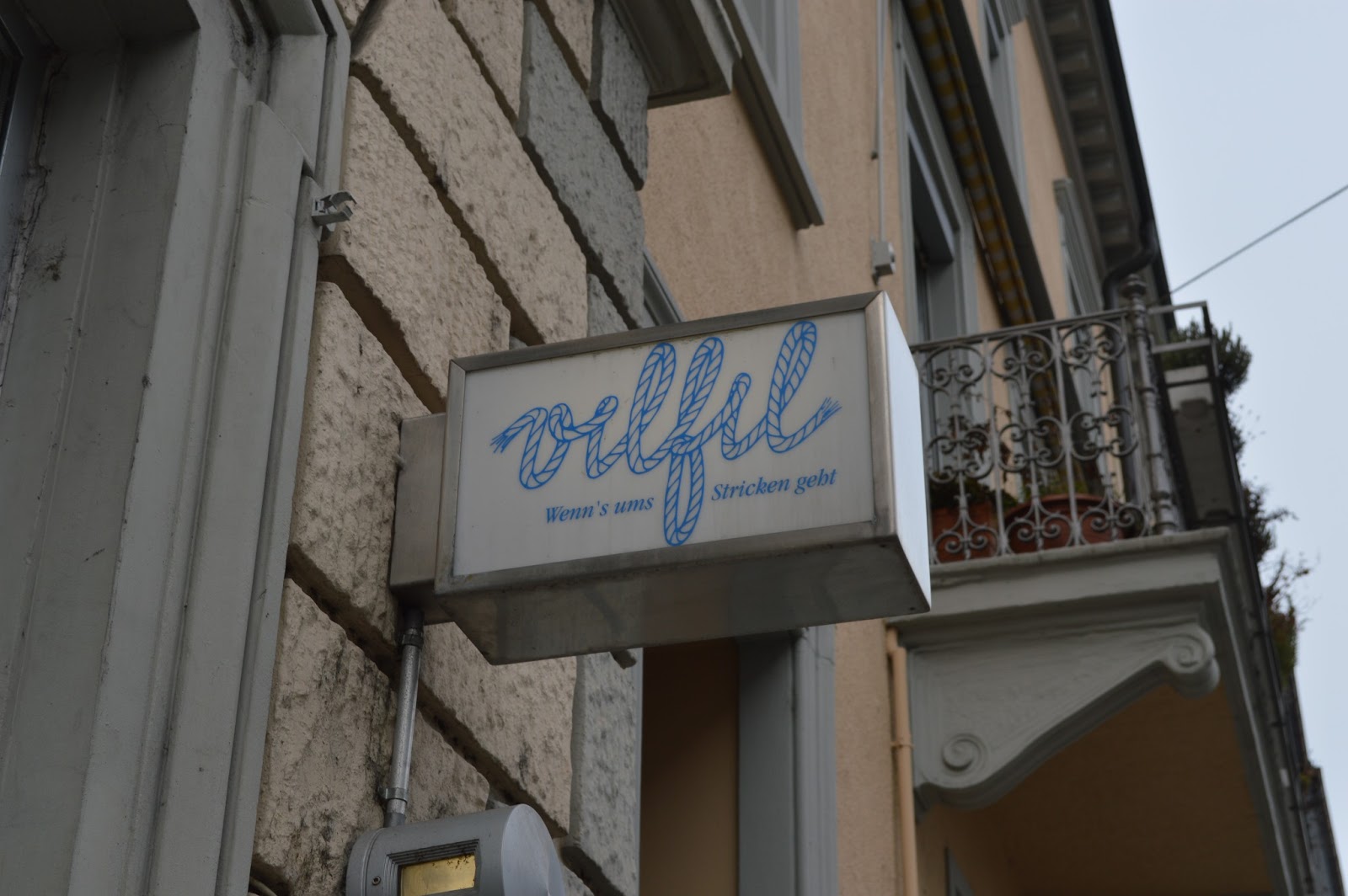 This was the only shop where I actually interacted instead of lurking, and the woman was more than patient with me. Unfortunately she was very much a knitter, not much of a crocheter, and this - coupled with the facts that I don't much care/know about yarn weight, the weird US vs. rest of the world crochet hook size, and yards vs. meters - led to lots of me leaning towards heavier yarns than what she thought I wanted. I probably should've just asked her to show me nice stuff.

In addition to the actual yarn, the shop also had dozens of knitted items for sale - hats, jackets, skirts, accessories, etc. I suspect these were made by the employees themselves when the store wasn't busy, and this seemed like it would be so much fun that I wanted to inquire if they had need of a non-German speaking intern. They also had pre-packaged yarns/supplies for various individual projects (most of them appeared to be knitting rather than crochet), which might be nice if you don't have time to browse all the options. As with Anna Lana, they had a huge variety of yarn materials, not just cotton and wools.

My final stop was also on the east side of Zurich Lake in a lovely part of town - much of Zurich isn't perhaps what one would expect from an old European city, but this area had it all: cobblestone streets, narrow alleys, small family-run shops. I'm definitely bringing B back for further exploration.

I was the youngest person in the shop by at least 30 years, and got a little side-eye from some of the Swiss ladies, but this may have been due to my camera and loud Desigual coat more than my lurking. The saleswomen didn't bat an eye. This shop also had their shelves arranged by color in columns, while the rows were the same yarns. It made for easy and aesthetically pleasing browsing, although there was no sign of any listed prices, so I was again left wondering if I could afford anything I had my eye on. They also had a display full of already-made items available, and a display afghan that I wanted to curl up under with a book and some tea and never leave. I didn't find any clearance yarn.

In terms of selection, they also had many, many wool-free options, and, based on the 100% silk ropes spread through some of the color displays, I suspect they had some pretty pricey yarns. I did see a repeat of some of the basic yarns as well, though, so there seemed to be a wide variety. 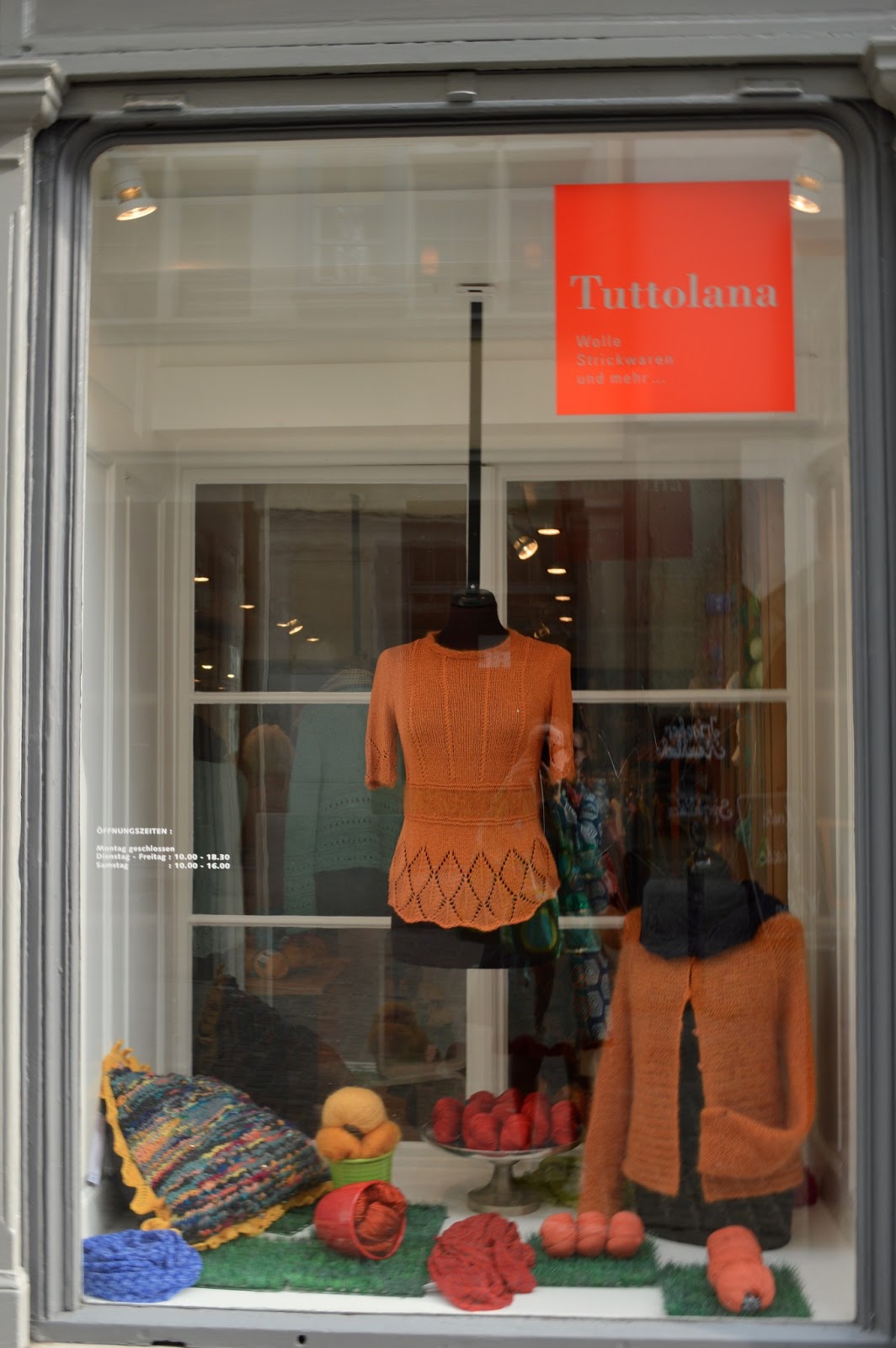 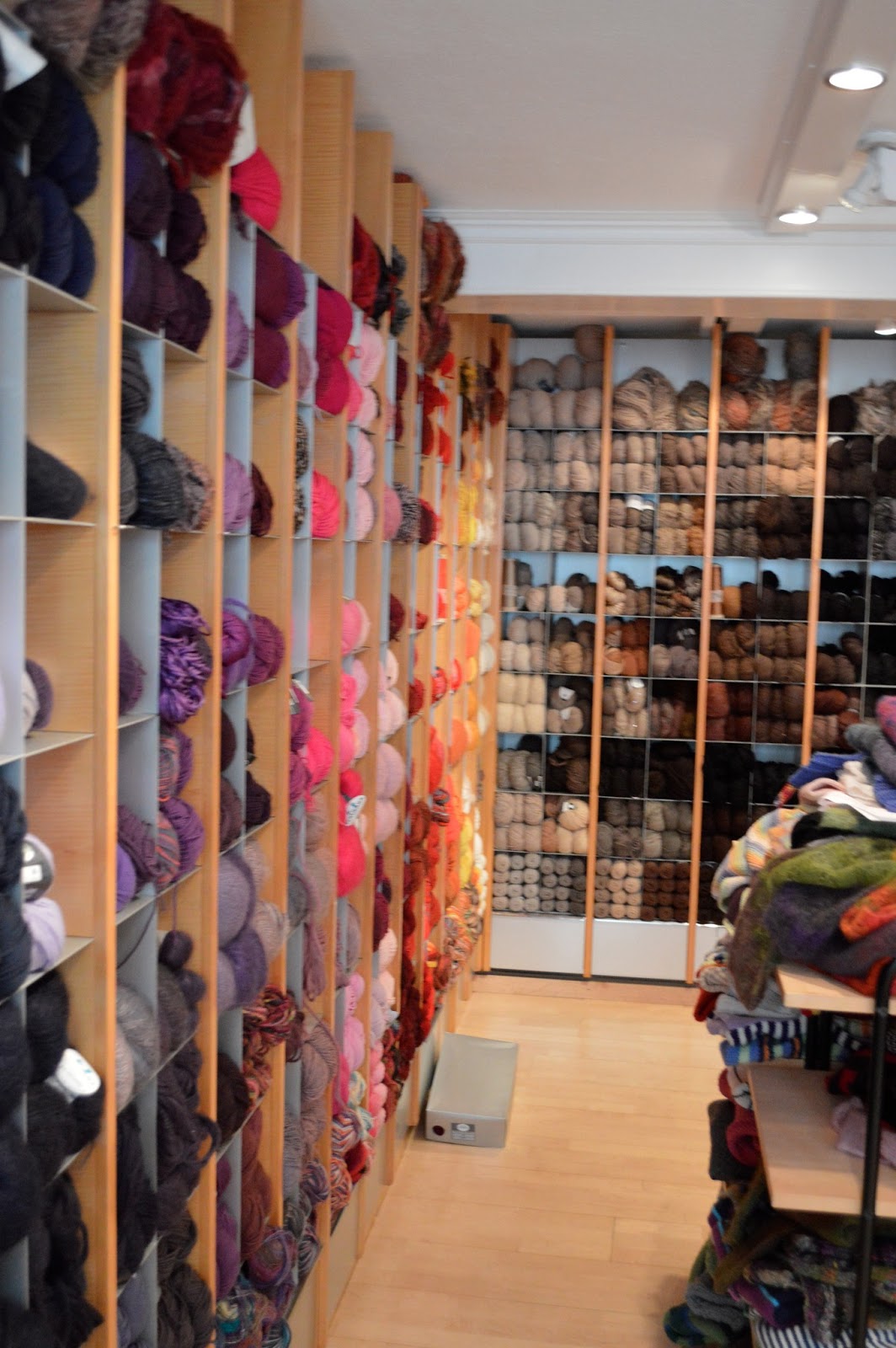 Overall, I was pleased to discover that Zurich has such a wonderful selection of yarn shops. I was also happy to realize that a small city can support three independent yarn stores - all shops were doing a bustling business when I was in them, and I had to wait to snap pictures without browsing customers. I also was happy to have an excuse to venture into unknown parts of the city - something I definitely need to make an effort to do more often.

Now, back to that afghan.

(All stores are located in Zürich)