Dinner and a chocolate berry tart

Last night I managed to produce both a main dish and a dessert before B got home - the first time ever I've accomplished such a feat (I even did a round of dishes as well!). Perhaps it wasn't a huge fait accompli in the larger picture, but it made for a lovely, relaxing evening - and both dishes turned out quite tasty. And yes, the week's theme of lime made an appearance in both!

For the main dish, I served up basically this shrimp dish over rice. I've made it several times before (it's on my tried and true board on Pinterest, where I stash my favorite recipes), and it always turns out well.

Since I am a bit gun shy around meat of any type (including seafood), I wimped out and bought tiny frozen shrimp that had been pre-cooked, making the preparation a total breeze (although to be fair, I do like the small shrimp - you get some in every bite and don't have to worry about the tails). I love this dish because it's so wonderfully flavorful - both the lime and the cumin are highlighted.
I won't take you step by step through the recipe, but safe to say that I encourage anyone to try it out - the marinade has a lot of flexibility in how to prep it. I use much less olive oil than it calls for (maybe 1-2 tablespoons) and usually a bit more garlic. Really, I can't recommend the recipe enough - it's quick, easy, tasty, and probably uses ingredients that you already have in your kitchen.


For dessert, I made a chocolate berry tart. I started with this recipe for a rustic raspberry tart, but my finished product bore little resemblance to it by the end. Also, I still don't have my rolling pin (I have an extremely nice silicone one that I shipped from the US, but it's in one of the boxes being held hostage by the Post), so things got a little dicey with the crust part. Apologies, I didn't get pictures of the early steps, nor did I remember to weigh anything other than the butter.


Combine the flour and sugar, then cut in the butter until it looks like very coarse crumbs. I used a pastry cutter (brought from the US) for this step, since I don't have a food processor or blender, but I'm sure those would work just as well (or better). If you don't have any of the above, I've made do in the past by cutting the butter into small chunks before adding it to the flour, then using a fork to smash it into small pieces. Unlike cookies, you really want the butter to be cold, so that it can be cut in and not just mush together.

Add the milk and vinegar until you can form a dough. Now, the original recipe called for  only 3 TB of milk, but I swear that the "all purpose" flour here is more absorbent or something - I often find myself having to add more liquid to get doughs the consistency I need. But definitely get some vinegar in there - it causes a nice flaky texture to the crust. Shape the dough into a ball, wrap in plastic wrap and flatten. Put in the refrigerator for an hour or so until it's nice and firm.

While the dough is refrigerating, mix together the zest, sugar, and flour in a bowl. Add the berries and toss to coat. I added a small squeeze of lime juice at this point as well - just because.

After your dough is firm, take it out of the fridge but keep it either in the plastic wrap or on some parchment paper - if you add more flour at this point you'll end up with a drier, not so nice crust. Roll out the dough in a circle-ish shape until it's around 1/4" (<1cm) thick and 12" (30 cm) in diameter (preferably with a rolling pin, but you know - whatevs).

Place the crust into a pie or tart pan and even it out around the edges as best you can.

Add the filling in - at this point, I decided to throw some what-passes-for-chocolate-chips-here (small chocolate chunks) on top, just to fill in the cracks. This turned out to be a wise move. 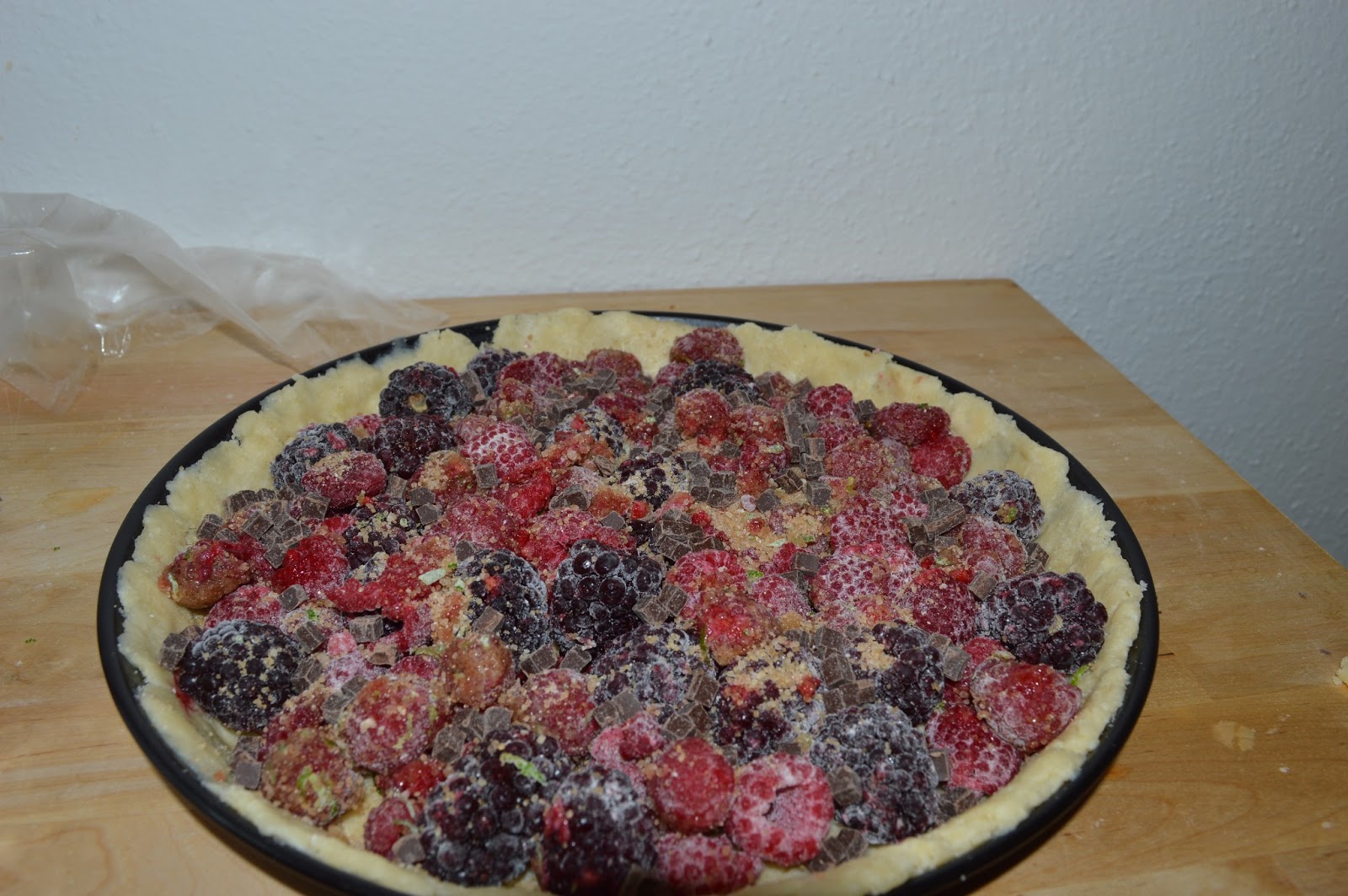 
The berries evened out well, and the filling was wonderful - not as runny as I feared. The lime taste does come through (B couldn't taste it, of course, but for normal people, it was there), but my favorite part was definitely the chocolate + berries, one of my favorite flavor combinations.
PS - This is a discussion I've had before with friends and coworkers (actually several times - is that weird?), but what exactly is the difference between a pie and a tart? Discuss.

Directions:
Mix flour and sugar. Cut in butter until it resembles coarse crumbs. Add in milk and vinegar, form the dough into a ball. Wrap in plastic wrap, flatten, and put in the refrigerator for around one hour until firm. For filling, mix together sugar, flour, and zest, then add berries and toss gently to coat. When the dough is chilled, roll out the crust to around 12" (30cm) in diameter (try not to use extra flour at this step). Place the crust into a greased pie or tart pan. Spread filling in the crust, sprinkle chocolate chips over the top. Bake at 400F (205C) for 35 minutes. Let cool for 15 minutes, then dust with powdered sugar if desired. Dig in.