The problem with not updating a blog in almost three months is that choosing a specific topic upon return becomes increasingly difficult. So I've decided to skip that decision and instead compose a random list of items that will be sure to reflect that current scattered state of my mind.

1. Top of the list: I finally submitted my US driver's license to be switched over to a Swiss one! Woo, celebrate. Ok, fine - it's not that exciting, but lemme explain. This has been hanging over my head for almost a year now (see point 3, below), and if the conversion isn't done within a year of entering Switzerland, then it's no good and I'd have to take all sorts of classes and driving lessons that would cost several thousand Swiss francs. So with some encouragement from a fellow American who waited until the last day to switch hers over, I got it in just under the wire (a semi-interesting note: I wouldn't have wanted to do it before last August. Although I've had a license since I was 16, my most recent renewal was in August of 2011, and Switzerland requires that a foreign license be at least 2 years old, otherwise they make you take driving classes. It never really occurred to me previously, but US licenses don't say anywhere on them that they are renewals. Discuss. Or not.)

2. I got a job! A WRITING job, even! (Should I have led with this, which is indisputably bigger news? Possibly, but I've actually been meaning to change my driver's license over for longer than I've been job hunting). I officially started on Monday - my assignment is to write an e-book guide to Zurich for www.expat-living.info. I'm super stoked and only slightly overwhelmed that I need to be an expert on the culture that I still feel such a stranger to myself.

3. As per item #1, the one year anniversary of my arrival in Switzerland looms very near. I arrived on the morning of January 15, 2013 - fresh-faced and prepared exhausted and terrified. I'd defended my dissertation five weeks previously and extricated myself from experiments in lab only 7 days before, which is when I started packing. I had left several boxes/items with friends in the hopes that they would have time to donate them somewhere worthy, and was lucky that I could leave the majority of my furnishings behind for the new tenants (my former dogsitters, lovely people). I spoke approximately three words of German and had no idea what I wanted to do with my life. I plan to do a more detailed post on this next week, but to summarize - moving is hard, culture shock is real, Switzerland is beautiful, and my husband is amazing. I'm grateful that I've had this experience, and I feel that every day continues to shape me in fundamental ways.

4. I did not hit my 50,000 word count goal for National Novel Writing Month back in November, unfortunately - a serious bout of food poisoning and two weeks of traveling around the US visiting with friends and family conspired against me. I did, however, finish with over 40,000 words and - for the first time ever -  plotlines that involved actual conflict/resolution, a milestone that I often trip over (I love designing worlds and characters, but have problems with conflict - a problem that goes beyond writing ;). Luckily, B has no such issues and helped me come up with several wonderful characters and entanglements that pushed the story forward).

5. Crafting got away from me the last few months, but I whipped up a shawl a couple weeks ago and am now working on a hat and possibly matching armwarmers to match. I'm not sure how much I actually like the shawl - I used this pattern with some modifications (I did a shell around the border instead of picot - mainly because I couldn't figure out the picot instructions. Lrn2utube, I know). I chose a relatively simple pattern, since the variegated yarn I had was quite loud, color-wise. Unfortunately, to my eye, it still didn't really work. So then you may ask why am I making a hat and armwarmers to match? Because I bought the largest ball of yarn known to man (not really, that's somewhere in Kansas) - 500 grams (over a pound - and keep in mind, yarn does not weigh much). Below is a picture of the ball after I finished the shawl. Lesson learned - humongous yarn balls are fun, but be triple sure you like the colors before buying.

6. I haven't made new year's resolutions for years, but my linguistic frustration has managed to channel itself into something productive; I am on a 10 day streak for German on DuoLingo and yesterday was able to field a few unexpected questions from various service people (exciting ones such as "Would you like the dressing mixed in?" and "On the Louis XIV, you want only shrimp?"). Baby steps, people, baby steps.

Guys, it's AMERICAN FOOTBALL! ON TV HERE! Yes, I whipped out my camera as witness to this. As most of you know, I'm a pretty big pro football fan (as one must be in order to maintain fandom of the Detroit Lions), and I'd been following games online all season. Little did I know that our basic cable package (purchased only because it was free with the highest speed internet available, top priority for B) includes a channel called US Sports 1. I stumbled across it randomly while flipping channels - they were playing a college bowl game, not a typical sight on Swiss television. So I've managed to see every playoff game so far - the time difference makes this a challenge, but I was grateful to see that they replay them the following day at a more reasonable hour. The only catch? The commentary is in German. It's quite surreal. I log game watching as language practice.

I have so many pictures from a backlog of recipes, trips (Munich, Milan, Rome, the US) and holidays (Thanksgiving, Christmas, New Year's), but I wasn't able to access my iPhoto library for a few months when it got too big for my old MacBook Pro. Now I have a beautiful new MacBook Air (yay for Christmas!), so with the help of an external hard drive, I'm slowly starting to sort through them. I'll leave you with my favorite picture of a trip to Milan back in September with my parents and B. It's my mother in contemplation of the unfinished Rondanini Pieta by Michelangelo: 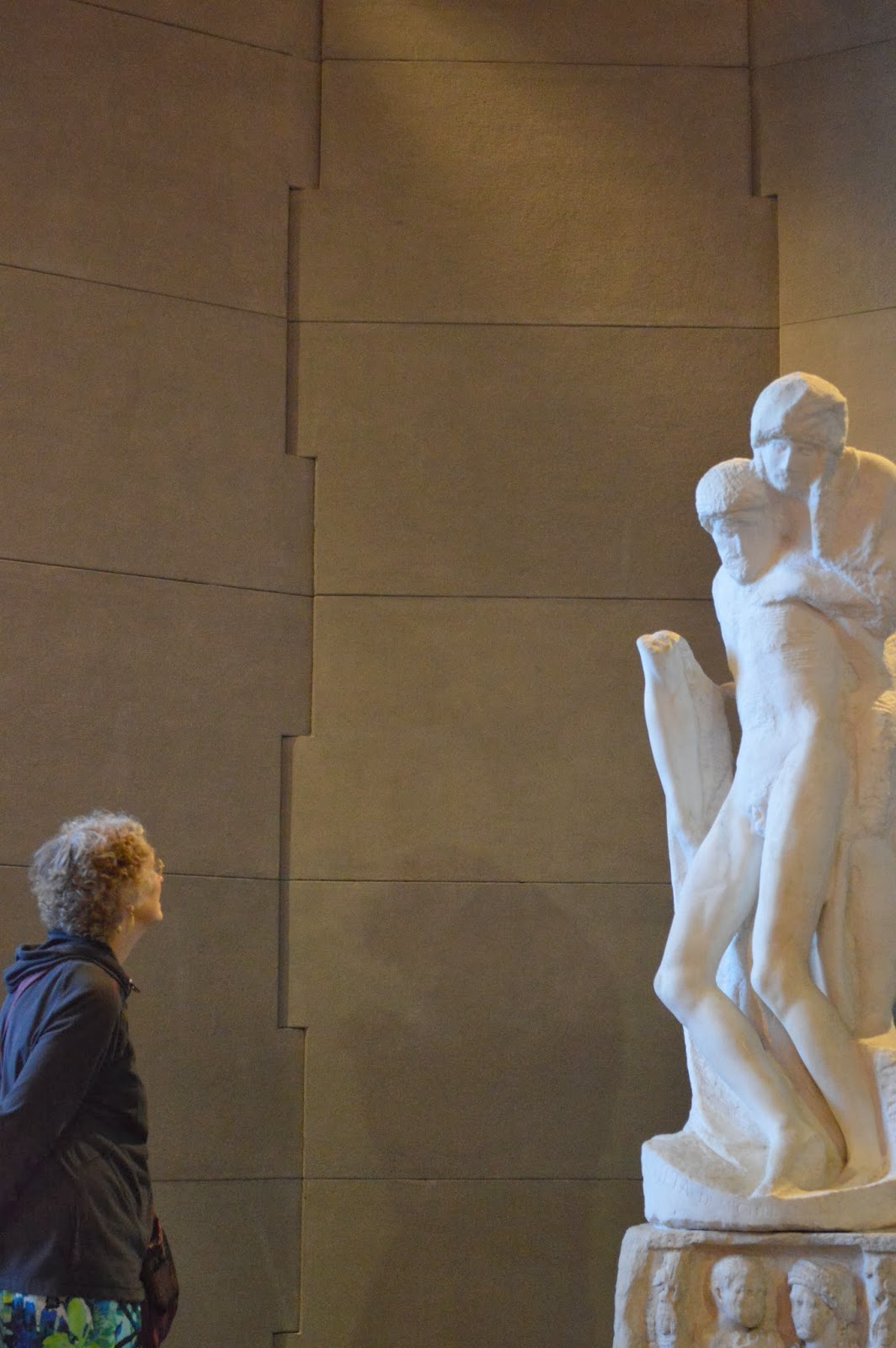